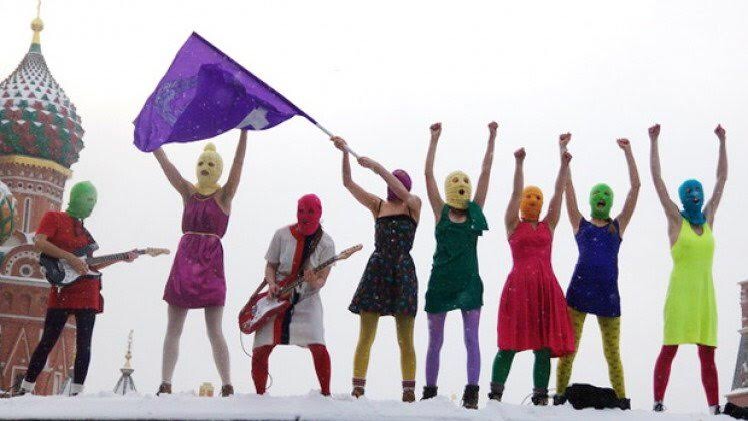 Famous people’s explosive, celebrated, seminal memoirs, how does one go about reviewing them without sounding like a worn out cassette? Take the Pussy Riot girls, for instance. Their story is generally well-known, regarded as heroism by some, as vulgarity by others.  Subversive and beautiful weapons, they’ve been fetishized and cursed, celebrated and anathemized. They had their own Netflix special, were whipped by the Cossacks during Winter Olympics in Sochi, were kicked off planes and were denied asylums. And still, seven years after that fateful performance, they manage to stay around, relevant, and, most critically, alive. The West, initially an eager enabler of Pussy Riot aesthetics and now engulfed by a threatening wave of its own existential problems, may grow fatigued of these statuesque rebels, but that in no way denies their significance. Their battle, after all, goes on. Their Sauron is far from defeated.

Maria Alyokhina, a key Pussy Riot girl, wrote her powerful and laconic memoir in 2017, quite some time after having endured her personal Golgotha. She is not prone to verbosity, making each word of her story heavy and impactful, like a sizeable stone being plunked into a quiet forest lake. It’s not a memoir, it’s more of an intimate conversation Maria has with a reader, a close one, around a kitchen table, with strong black tea and cigarette smoke and mittens quietly drying on the heater. No embellishments, no sanctimonious sermons about fighting for human rights. Just a conversation, taking us back to that pivotal act at that strategically important church:

This performance was first in the arduous litany of many others: the Russian police had their own performance, and the corrupt courts too, and the brutal penitentiary system, and even the Botoxed tzar with his dead fish eyes had a show of his own. For everything in that country is performative, from the lowest bureaucratic motion to the highest affairs of state, concocted deep within Kremlin’s bloodied walls.

From Hobbesian Leviathan to Bentham’s Panopticon to Orwellian fantasies, a myriad of classical and contemporary metaphors have been used to various degrees of poignancy to describe what it’s like to live in a repressive system. And it’s always dismaying how fundamentally little things change, making pessimists the world over sigh and say “there’s nothing new under the sun.” On the Goliath side, organizations like KGB are now brandishing a new set of abbreviations (in this case FSB), but their ghastly innards (and often their actual staff) are the same old guard of Judas apparatchiks. On the David side, previous generation of Soviet political dissidents like Mandelstam and countless others are now replaced by Pussy Riot, Navalny, and God knows who else in the near future. There are many faces to a regime, but underneath it’s the same clever cockroach.

There is one thing about Pussy Riot that is somewhat overlooked by the mass media yet captured quite clearly in Maria’s memoir. These are clever girls. Well-read. Erudite. Deep thinkers. They are not actors, they are philosophers, tough like steel, fragile like children, terrifying in their modesty and surprising in their resilience. They are not into punk for the studs, spikes, and leather jackets. They repurpose and revive it, resurrecting it into a weapon of resistance powerful enough to piss off Putin, the man who rides horses topless, poisons his enemies, and periodically interferes in elections here and there.

In her tireless attempts to alleviate inhumane conditions endured by inmates in Russian prisons, Maria works hard and with mixed results, enduring threats, indifference and ridicule. No matter though, because her wisdom grants this young woman strength of acceptance and grace of humility. Maria gladly becomes a martyr, sacrified at the altar of the hollow Russian Ark:

“I think about fate. About how many prisoners who protested have died and now lie in the ground. It is just an illusion that you go on hunger strike to achieve results. Yes, that’s how it begins but, later, you realize that it’s not for the imagined outcome, but for the very right to protest. A narrow sliver of a right, in a huge field of injustice and mistreatment. You also realize that your right will always be just a narrow sliver in the field. Not there, with the majority. But I love this sliver of freedom, however little it’s noticed by those on the other side of the wall.”